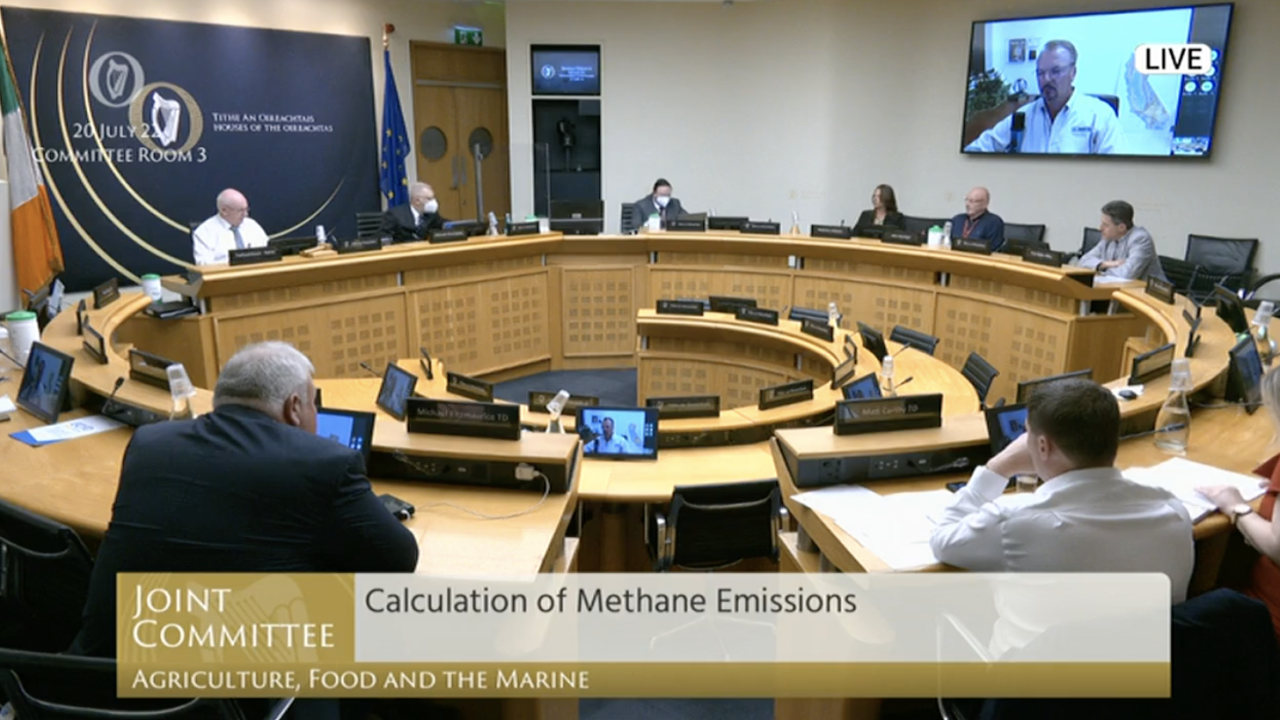 Dr. Frank Mitloehner, CLEAR Center director and UC Davis professor and Cooperative Extension air quality specialist, joined University of Oxford professor of physics, Dr. Myles Allen, and other climate scientists to testify at a special meeting of the Irish Joint Orieachtas Committee on Agriculture, Food and the Marine. The meeting focused on how methane emissions – including those from animal agriculture – should be considered and calculated by the country. Large parts of the discussion were centered around how livestock can be part of Ireland’s efforts to reach the country’s climate goals.

“I say this as someone who has dedicated his career to helping to mitigate emissions in the livestock sector and as someone who holds our farmers in the highest regard,” Dr. Mitloehner said in his opening statement. “The [Irish cattle] sector has room to improve and could feasibly reduce emissions by 20% to 30% by employing emerging technologies. In fact, we’re doing just that in California. Yes, you can reach your goals, keep your farms viable and ensure food systems can meet demand, which will only increase as the global population keeps growing.”

Dr. Allen is a senior IPCC author and climate scientist, who with his colleagues, has helped developed a method to measure the warming impact of methane – the primary greenhouse gas associated with animal agriculture. GWP*, as it is called, takes into consideration that methane is not only emitted, but also destroyed in a relatively short amount time of about 12 years. As such, how it warms our atmosphere is significantly different than carbon dioxide, which has a lifespan of about 1000 years. In short, increased methane emissions will lead to significant warming, while stable emissions will not add additional warming to our climate. If methane emissions decrease, it can help lower global temperatures.

Currently emissions around the world are being calculate using an older metric, GWP100, which treats all greenhouse gases as if they warmed the same. This metric overestimates the warming contribution of methane – the largest source of GHG emissions in the dairy-heavy Irish agricultural sector – by three to four times. Dr. Allen urged the committee to consider measuring methane emissions by how they contribute to global warming, not just the CO2 equivalence of the gas.

“I just want to remind you of Dr. Mitloehner’s point about how we don’t need farmers to feel threatened. It could easily be seen as an opportunity for farming. We’re sort of saddled with this misperception of conflict because of the incorrect way we measure the impact of farming on climate,” Dr. Allen said. “This is a problem we don’t need to have. If we actually measured the impact of the farmers in your constituency on climate, on global temperatures, rather than on this carbon footprint I think farmers would be reassured by the results.”

Read a story about the meeting in the Irish Times here.

Here is a transcript of Dr. Mitloehner’s opening statement:

Thank you, Chairman Cahill, and members of the committee, for inviting me to discuss methane emissions from livestock.

As a professor of animal science and air quality specialist in the Department of Animal Science at the University of California, Davis, much of my work revolves around studying the emissions of livestock in order to determine their contribution to air pollution and climate change. My position at UC Davis puts me in the leading agricultural state in America, where half of all U.S. produce and 20% of all dairy products are being grown. Here in California, we have a dairy herd very similar in size to that of Ireland. I research and speak throughout the world on animal agriculture, discussing how livestock produces greenhouse gas emissions and how we can mitigate them.

We clearly see that demand for animal sourced foods is rising and the bulk of livestock emissions are coming from less efficient regions of the world. Reducing herd sizes isn’t a practical solution, especially in Ireland, where farmers are very efficient producers. If they scaled back their herds, production would likely move to another region so that global demand could be met. Given how proficient Irish farmers are, those picking up the slack, so to speak, may well be less environmentally sustainable than Irish farmers. This is called leakage, a phenomenon that could well lead to a spike – not a reduction – in greenhouse gas emissions.

Make no mistake, animal agriculture has indeed played a role in advancing atmospheric warming … not to the extent that other sectors such as transportation and energy have … but a role nonetheless. Furthermore, it can help to limit warming further. Granted, it will require a departure from business as usual and require farmers to embrace innovation and the adoption of new technologies, but if you think about it, those things have never been obstacles to those looking to improve their operations.

Across the world, countries are looking for solutions to reduce emissions from their livestock. Here in California, the state is working with farmers to reduce methane emissions on dairies, and they are seeing promising results through collaboration. Farmers can and should be part of your approach to reducing greenhouse gases.

I say this as someone who has dedicated his career to helping to mitigate emissions in the livestock sector and as someone who holds our farmers in the highest regard. The sector has room to improve and could feasibly reduce emissions by 20% to 30% by employing emerging technologies. In fact, we’re doing just that in California. Yes, you can reach your goals, keep your farms viable and ensure food systems can meet demand, which will only increase as the global population keeps growing.

The old saying that you can’t manage what you can’t measure applies as well to methane emitted by cattle herds. Ireland is distinctive in that its cattle are primarily raised on pasture, which has significant carbon sequestration capacity. What is surprising is it is not well known how much carbon is being sequestered by Irish farms. That needs to be better understood as we discuss carbon accounting and set emissions targets.

There are solutions available right now that can reduce methane emissions from cattle. These solutions will likely need to be tweaked to fit the Irish way of raising livestock, but that’s not a formidable challenge.

Feed additives are promising, with significant potential to reduce enteric methane emissions in livestock. Bovaer, also known as 3NOP, has recently been recognized by the European Union as a proven methane-reduction feed additive with the potential of reducing more than 30%. And other additives are on the way.

California has reduced the emissions of more than 2 million metric tons of CO2e annually with dairy digesters reducing 30% of its methane. While I understand anaerobic digesters are a major departure from the Irish way of dairy production, the critical point is that we are formulating real, workable solutions to a problem many believe can only be tackled through draconian herd reductions and dietary changes.

Why we need animal agriculture

The global population is on trend to triple in our lifetimes, representing an enormous food security and natural resource challenge. Even now we are seeing food security issues reveal themselves, as parts of Europe are at war. Meeting these challenges will require the world to produce plant- and animal-based food and to produce them more efficiently, using both high-quality and marginal agricultural lands. But first, we need to examine the facts, not engage in hyperbole.

Ireland already plays a large role in producing food for the world. More than 90 percent of its beef and dairy products are used in homes outside its borders.

Irish farmers produce animal-sourced foods more efficiently than other regions, while always striving to improve as they provide nutritious food to those who need it at home and abroad.

Given the nation’s role in the global supply chain, we would do well to allow it to be part of a global solution to limiting climate change.